Scene 1:
IF
any condition is met

Scene 2
IF
all condition is met

Those are the two scenes can you help me to fix this bug?

Do you want one of the motion sensors in scene 2 to turn off the switch when motion is detected?

We will further check whether scene 2 is available. If it could set a scene where the sensor detects motion and then triggers the switch to stay on for a specific amount of time, would that do what you need?

Is there any update on my issue?

no updates more then 2 mounts on the issue

Sorry for the late reply. Would you please submit a feedback ticket to us?

I have this same scenario, down to the identical devices. I haven’t tested it yet as I’m in the process of changing systems, but the scenes should work as described above.

Apparently it doesn’t work according to my thinking. Having said that, would creating a separate scene for each motion sensor ‘No Motion Detected’ work to turn off the switch?

The only issue I see with that is that if one motion detector sensed ‘no motion’ before the other one did it would turn off the switch while the space was still occupied.

I finally got more devices installed so I tested the above Auto Scenes. I was pleasantly surprised, it actually worked. I set it to turn on a light when either motion sensor sees motion and it worked as expected. I also built an Auto Scene that matches the ‘No Motion Detected’ scene above to turn the light off. I was surprised, but so far it has worked flawlessly. So, there is hope that this will actually work.

What switch do you use? And do you have the LAN icon next to the scene? Because if you do not have the icon it will work. 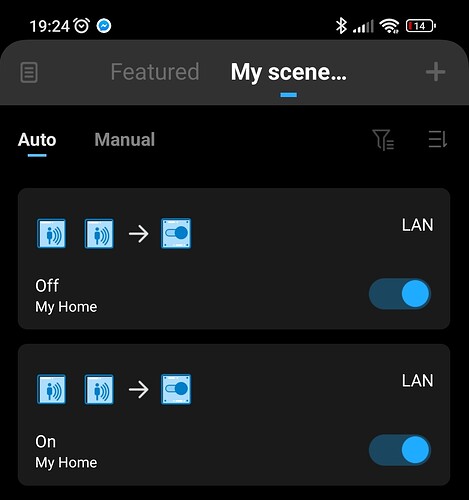 It is like that in LAN mode the Off scene is not procesed at all if only one the sensores is trigered.

I do not have the ‘Lan’ icon on my scenes, so maybe that’s why it works for me.

Most likely your switch is not zigbee. If the switch is wi-fi connected then it works like a charm but if you want to run in standalone mode (without wi-fi) you need the LAN mode. The problem is that in standalone mode, in scene that have the all conditions needs to be met, is not checking the state of the second sensorand it is not trigered.

Only Zigbee senzor has No motion status! The RF motion sensor has just one status Triggered. And on the other hand all on mine scenes is mising the mention LAN!!!

Just like you set, all conditions are met then the scene works.